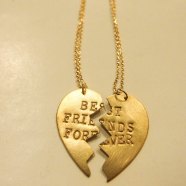 Breakup to Makeup: Friendship and Loss

It seemed that serious at the time. In May 2011 I fell out with someone who had been my ace since elementary school.  It started out as an argument, and in and of itself that wasn’t a huge deal. In the two decades that we’d known each other we had disagreements. However conflict was rare between us, and we usually resolved our differences quickly. We often balanced each other out. Whenever she flamed white hot I flowed cool and steady, and vice versa.

This time would be different.  There was no balance or chill to be found.We were both intransigent and unwilling to de-escalate the situation. Instead we chose to feed off each other’s energy, our resentment creating a maelstrom of emotion between us.

Words were our weapons of choice, and for the first time we turned our formidable anger against each other. The end result of this wahala? The mutually assured destruction of a friendship I’d had for two-thirds of my existence.

The bitter dissolution of our friendship hurt. She was my friend Tisha, whom I wrote about in my “Shades of Blackness” series in 2013. We knew each other from back in the day, growing up in the same neighborhood and graduating from the same high school. Tisha was my ride or die and I was hers, holding each other down through the trials of adolescence and womanhood.

The end of that was painful, and in all honesty it could have been prevented. But neither of us would budge.In the aftermath of our blowout I thought of her occasionally, wondering how she and her child were doing. But I always balked at reaching out. Still consumed by anger at how things had transpired and unwilling to put my ego in check, I let the situation remain unchanged. We didn’t speak. Life continued on, her absence a wound that would still bring a twinge of pain if I thought about it.

It seemed that serious at the time. But four and half years later, sitting side by side with her as we blankly stared at the closed casket of the friend who rounded out our quartet in high school, I understood that it wasn’t. We hugged each other and cried, the resentment from our last conversation now gone. The self-righteous indignation that mattered so much to me before evaporated, now made irrelevant in the wake of Tiffni’s death.

The death of our friend would be the catalyst that brought us together and mended our broken sisterhood. I’m glad that the beef is done and that I have my homie back. She knows me very well, and is one of the few people who both understands and appreciates the complex dualities of my nature.

Now we speak and see each other frequently-just as we used to. Last night I smiled while watching our children make gingerbread houses together. After they went to bed my squad broke out a bottle of Ciroc Pineapple and took shots, talking and laughing late into the morning. I had a great time but there was a bittersweet edge present in my mind during the festivities.

I’m overjoyed to have my peeps back together…but I’m really upset with and disappointed in myself. I was both petty and childish before, more concerned with holding on to my pride than patching things up with my day one.  I am ashamed that this is what it took for me to wake up. My friendship is being repaired. However I still have to confront the utter waste of time involved. I still have to live with the knowledge that I wasted over four years living with enmity towards someone, and that time can never be recovered.

I am grateful for the opportunity to reconcile, but I regret not taking action to do so earlier. I have shared this experience in hopes that others will take inventory of their lives and repair broken relationships with family and friends (if safe to do so). Do not wait until Death visits your circle to make things right.

← No Human Involved Clearing The Path: On Girls, Education and Gratitude →